May I use a Radar Detector in Virginia? 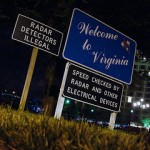 If you have seen the signs on the Virginia border, you know that radar detectors are illegal in Virginia.  Va. Code § 46.2-1079 explains:

It shall be unlawful for any person to operate a motor vehicle on the highways of the Commonwealth when such vehicle is equipped with any device or mechanism, passive or active, to detect or purposefully interfere with or diminish the measurement capabilities of any radar, laser, or other device or mechanism employed by law-enforcement personnel to measure the speed of motor vehicles on the highways of the Commonwealth for law-enforcement purposes.

While you won’t get any demerit points for violation of this statute, it will be a hassle to deal with any fines or have your radar detector taken from you.  If you are caught with a radar detector, the Virginia Code explains that an arresting officer “may” take a radar detector from you as evidence.  You can get the radar detector back later, when it is no longer needed as evidence, but it doesn’t sound like a simple process.

This section shall not be construed to authorize the forfeiture to the Commonwealth of any such device or mechanism. Any such device or mechanism may be taken by the arresting officer if needed as evidence, and, when no longer needed, shall be returned to the person charged with a violation of this section, or at that person’s request, and his expense, mailed to an address specified by him. Any unclaimed devices may be destroyed on court order after six months have elapsed from the final date for filing an appeal.

An effort was made in February of 2010 to repeal the whole radar detector ban code section, but the bill’s sponsor, Del. Joe May, could not garner the votes needed to pass the bill.