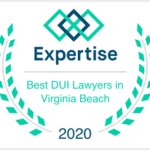 If you have been charged with DUI, you need a good, aggressive lawyer to protect your rights.

In Virginia, if your BAC level is .08 or higher, the law creates a presumption of intoxication. Sometimes we can keep a breath certificate results out of evidence if the 3 hour implied-consent rule was not followed. Even so, the prosecution can establish a DUI without a breathalyzer test result and can rely on field sobriety tests and other indicia of impairment, so it is important that we review the Commonwealth’s evidence by completing discovery before your trial date so we know whether to put on a trial or try to work out a plea agreement with a prosecutor.

If you are found guilty, because a DUI is a criminal charge, the penalties can be severe. For a first offense, punishment may include up to a year in jail, fines starting at $250 (and up to $2500), and a suspended license for 12 months. A judge has discretion to give a restricted license to allow an offender to drive to and from work during this period but this requires the installation of an ignition interlock device. (Starting July 1, 2020, Virginia law will allow a broader restricted license to drive for any purpose if you meet certain criteria.) If your blood alcohol level was .15 or above and you are found guilty, there is mandatory jail time.

If you are charged with refusing a breath test as well as DUI, there are risks for taking both cases to trial because a refusal conviction carries a 1 year license suspension. However, the penalty for refusals has been alleviated recently in that you can now petition the court for a restricted license after 30 days.

Penalties for a DUI 2nd come with mandatory jail time as well, depending on whether the 2nd offense occurred within 5 years or 10 years of the first offense. A DUI 3rd within 10 years is charged as a felony.