May I Concealed-Carry a Handgun into a Bar in Virginia? 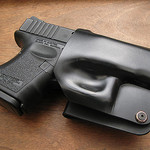 The answer is: Yes, but don’t drink if you are carrying concealed!

In 2010, Virginia law was changed to allow concealed carrying into bars and restaurants that serve alcohol.  (Of course, you will need a concealed handgun permit to be able to do this.) This has not increased violence at the bars in Virginia. It actually decreased it.

“According to state police records, not only did gun violence in bars and restaurants not increase under the new law, it decreased by 5.2 percent.” – World Net Daily, citing a Richmond Times-Dispatch Study.

Still, unless you are a federal, state, or local law enforcement officer, you may NOT drink if you are concealed-carrying at a bar.  (You can open carry legally while drinking, although some advise against the wisdom of this.)  Virginia Code § 18.2-308.012 states:

Finally, know your limits. As mentioned in an earlier post, Greg Underwood, the Commonwealth Attorney of Norfolk was charged with concealed carrying while intoxicated and Driving Under the Influence, among other charges.  It is unlawful to concealed-carry while you are intoxicated.  So don’t get stuck in that situation and be safe out there!