Reckless Driving for Driving Two Abreast in a Single Lane 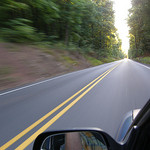 You can get a reckless driving conviction for “driving two abreast in a single lane.”  This is a Class 1 misdemeanor criminal offense in Virginia. The maximum punishment can include up to 12 months incarceration, a fine of up to $2,500.00 and a suspension of your privilege to drive for six months. Virginia is just very very tough on drivers and penalties.

Va Code § 46.2-857 explains what is meant by “driving two abreast in a single lane.” (There is another code section making it a reckless driving offense to “pass two vehicles abreast”, but that is a different code section and covers something different.)

When defending one of these charges, I look to spot certain issues:

Reckless driving is a serious charge in Virginia. It is a class 1 criminal misdemeanor offense. In cases where the judge finds that the evidence is enough to convict, that he believes the behavior covered under the reckless driving statute for driving two abreast in a single lane occurred, we can still ask the judge to consider reducing the charge to improper driving.

Compared to reckless driving, which means 6 demerit points for 11 years on your driving record, improper driving is only 3 demerit points for 3 years and is a traffic infraction, not a criminal misdemeanor charge.  Please call us today if you need aggressive defense.