What is Constructive Possession of Marijuana? 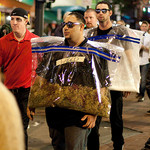 I recently had a client whose possession of marijuana charge (under VA Code § 18.2-250.1) was dismissed because the police officer failed to prove that my client was aware of the presence and character of the substance, marijuana, located in the center console of the vehicle he was driving. In my client’s case, he did not know that the marijuana was there, since he was not driving his own vehicle. But even if he was driving his own vehicle, it would not mean that he is guilty as charged.

As mentioned previously, the prosecution has the burden of proving a defendant’s guilt beyond a reasonable doubt: proving that he was aware that he was in possession of marijuana and that he knew or should have known that the substance in his possession was actually marijuana. Possession may be actual (such as on a person) or constructive (such as in a possession like a car that someone owns).

In Drew v. Commonwealth, 230 Va. 471, 473 (1986), the Supreme Court of Virginia indicated that to prove constructive possession, the prosecution needs to “point to evidence of acts, statements, or conduct of the accused or other facts or circumstances which tend to show that the defendant was aware of both the presence and character of the substance and that it was subject to his dominion and control.”

Proximity to a controlled substance is a factor, but is insufficient alone to establish possession. Castaneda v. Commonwealth, 7 Va.App. 574, 583 (1989). Furthermore, VA Code 182.-250.1, states that “Upon the prosecution of a person for violation of this section, ownership or occupancy of the premises or vehicle upon or in which marijuana was found shall not create a presumption that such person either knowingly or intentionally possessed such marijuana.”

I ask these questions when I handle a possession of marijuana case.

Please call my office today at 757-932-0464 if you would like a consultation on your particular criminal matter.  Your rights are worth fighting for.