May I Concealed-Carry a Handgun to Church? 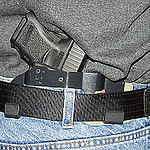 In 2011, Attorney General Ken Cuccinelli wrote an advisory opinion answering the question of whether a person with a concealed handgun permit can carry his firearm into a place of worship for personal safety purposes under Va Code § 18.2-283. This statute states: “If any person carry any gun, pistol, bowie knife, dagger or other dangerous weapon, without good and sufficient reason, to a place of worship while a meeting for religious purposes is being held at such place he shall be guilty of a Class 4 misdemeanor.” (Emphasis mine.)

An official opinion is legal advice from the Attorney General’s office and may be given deference by the courts, but is not binding on the courts. The Attorney General based his opinion on existing statutes, the Virginia and United States Constitutions, and relevant court decisions. He concluded that lawfully carrying a firearm for self-defense and personal protection constitutes a “good and sufficient” reason within the statute, based on his understanding of state and federal law.

The right of self-defense lies at the heart of the right to keep and bear arms.  The Attorney General cites the United States Supreme Court, which stated that “[s]elf-defense is a basic right, recognized by many legal systems from ancient times to the present day, and in Heller, we held that individual self-defense is the central component of the Second Amendment right . . . Thus, we concluded, citizens must be permitted to use handguns for the core lawful purpose of self-defense.” (McDonald, 130 S. Ct. at 3036)

The Attorney General noted that churches, synagogues, mosques and other religious entities have private property rights and can restrict or ban the carrying of weapons onto their private property.  The full text of this opinion can be found here: Opinion 11-043.