How You Should Respond When Stopped by a Police Officer 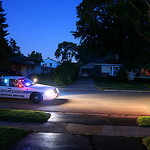 Recently a friend of mine, a young lady, was pulled over by a male police officer in Virginia Beach. She noticed she was being followed by an officer and was eventually stopped for “weaving” as she drove, which she adamantly denies. She blew into the breathalyzer for the preliminary breath test, just to be done with the officer. After the machine returned a reading of “zero,” the young officer proceeded to ask my friend what she was doing with her life and what she was up to. This wasn’t the first time my friend ran into this particular officer. While this sounds like a case of harassment and a failed attempt to flirt, it reminds me of the importance of knowing how to respond to officers at the time of a stop.

My friend took the handheld preliminary breath test, but Virginia law only requires you to take the real breath test at the station or the jail. When stopped by police:

At Regent University School of Law, Professor Duane, a former defense attorney makes clear in a law school lecture that has gone viral, anything you say to police can and will be used against you. Even if you are innocent, statements you say can be used against you. In the second half of his class room lecture, Professor Duane lets a Virginia Beach Police Department officer explain some of the department’s techniques. The officer agrees with Professor Duane’s instructions not to speak with police.

Everything you say can be used against you! Police will often fish for information to look for DUI drivers.

“Where are you coming from?”…

“How many drinks have you had?”

I often see drivers charged with reckless driving based on statements they made to a police officer. Police officers will arrive at the scene of an accident, investigate, and charge someone with reckless driving. Statements made to the officer by a driver may come in as evidence in court as an admission of the driver. Drivers need to realize that anything they say to police can and will be used against them.