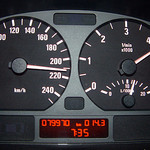 Here’s one tip: if you were charged with “simply” a speeding ticket, the box saying “you may avoid coming to court only if this box is checked” would be checked. But if you were charged with reckless driving by speed or another type of reckless driving, the officer or trooper will cross out this section saying that you may avoid coming to court. This is because a misdemeanor charge of reckless driving carries the possibility of jail time and the judge will want you or your attorney to be there. An attorney may be able to have your case tried in your absence, but you should discuss the availability of this option with a traffic defense attorney first.

It is important that you fight your reckless driving charge. A criminal misdemeanor conviction is no laughing matter.