Driving While Intoxicated Does Not Equal Reckless Driving 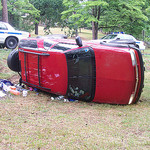 The Court reasoned that “One may be both drunk and reckless … [or] reckless though not drunk… [, or] under the influence of intoxicants and yet drive carefully.” (Note: You also can not be guilty of BOTH reckless driving and DUI for acts arising out of the same incident.)

Even if we assume that a defendant was intoxicated at the time of the traffic stop, this establishes little else. The Commonwealth needs to prove every essential element of the offense of reckless driving and prove beyond a reasonable doubt that a defendant was driving recklessly. The Commonwealth needs to show that there is no reasonable hypothesis of innocence. It can not speculate and conjecture as to what caused a defendant to lose control of his car.

In one of my cases, even the prosecutor at the General District Court agreed that my client was not guilty of reckless driving even though there was a single vehicle accident and evidence of intoxication. We had appealed the General District Court outcome, but we did not even need to take the case to trial to win in the Circuit Court. Every case has its own particular facts and circumstances. Please speak with a traffic defense attorney to prepare your best defense today.