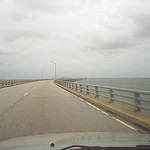 The Chesapeake Bay Bridge Tunnel is a 23 mile long bridge and tunnel that connects the Delmarva Peninsula of the Eastern Shore of Virginia with Virginia Beach and the greater Hampton Roads area. It is a beautiful scenic drive. While driving on the bridge, you may not see any land in sight. You will feel like you are driving over the middle of the ocean.

Drivers are often surprised by Chesapeake Bay Bridge police who camp out at special emergency pull off sections of the bridge, which occur every few miles. Drivers often don’t realize how fast they are going since there are no buildings or landmarks to help a driver perceive their actual speed. Understandably, police are concerned about safety on the bridge and officers that are assigned specifically to patrol the bridge spend a lot of time there.

If you were charged with reckless driving on the Chesapeake Bay Bridge Tunnel, I would be glad to offer you a free consultation to discuss with you what you can expect in court and how you can prepare for court.