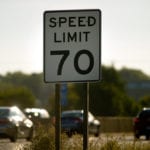 After his fifth year of sponsoring a bill, Sen. David Suetterlein of Roanoake County was successful in increasing Virginia’s reckless driving by speed threshold to driving above 85 mph, instead of above 80 mph. (On a side note, I noticed that Sen. Suetterlein went to Grove City College and we probably shared some of the same professors since our time there overlapped. I’m glad to see a fellow Grover making an equitable change in the law. I’ll explain why it this is equitable below.)

The penalty will be increased on the fine for speeding tickets for speeding between 81-85 mph in a 65 mph zone. Virginia Code § 46.2-878.3 will be amended to state. “Any person who drives a motor vehicle at a speed in excess of 80 miles per hour but below 86 miles per hour on any highway in the Commonwealth having a maximum speed limit of 65 miles per hour shall be subject to an additional fine of $100.”